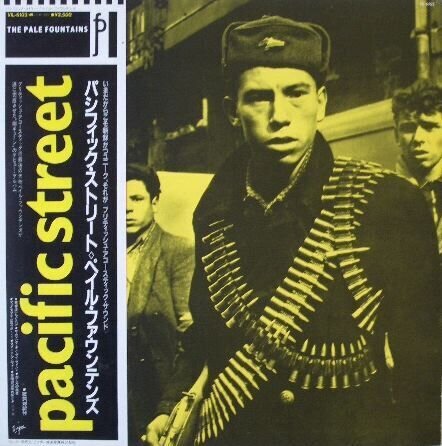 My artist who changed my life, 'Michael Head' ..
My story of Mick Head..

My love for Mick Head can not be expressed in words.

I have not picked them, I have advanced ...until day 9.

But this time, I decided on this one, the album which is the starting point of my love to Mick Head.

One day in 1982, I ran into a record shop by their first single "Something On My Mind / Just a Girl" by chance.

I also liked the name of the band "The Pale Fountains" very much.
That's nice naming.

In 1984, their first album was released from Virgin.
A fancy arrangement like Bacharach, Sound of acoustic guitar, Spearmint voice of Mick .. Beautiful Trumpet of Andy, brilliant Baseline of Biffa ...
Orchestration like John Barry..

There is no masterpiece single such as "Thank You" or "Palm of My Hand" there.
However, it is complete as a movie soundtrack as an album.
It has various elements of music crossover.
It is a complicated arrangement, every time I listen it has new discoveries and I always feel fresh. They are the charm of this album. Just "classic" eternity.

I was able to meet Mick for the first time personally,
It is 2008.
One day, suddenly I heard the news of the reunion of The Pale Fountains.
I decided to go to UK soon without thinking.
Just two days gig at Liverpool and London. It was a great two days.
I was moved to tears.
After the gig finished I waited for him outside the door of venue.
I met Mick for the first time.
That 'great songwriter' ..

I joined the band and covered "Thank You" and sang.
In 2010 Mick found a "Thank You" I sing on YouTube and heard it with Alice, his beloved daughter. And they gave me a message.
"Reach" to Mick..

In 2012, I went to Liverpool to meet Mick. Enjoyed lunch beer with Mick, and he came to my hotel room.
He made me listen to "Artorius Revisited EP" before release.
It is absolutely a secret thing..
That was absolutely wonderful content.
Mick, along with the sound source, sang "Newby Street" to me.
It was a dreamliest day for me. I went to a place related to him at Liverpool..
BBC, The Kazimier, BRINK ..
There was a REB gig poster(for Kazimier 18.Oct.2013, that Great Peacock Artwork by Pascal..) there.

'Violette Records' is the most wonderful record label in the world for me.
From the time the label was founded I love them, I still buy all the posters they release for show love for Mick.

The gig of Union Chapel in London in 2014 is also one of the best memories..

I am constantly loving the newest Mick Head of now.
His work always does not disappoint me.
He always evolves and I can not help loving his latest work all the time.
His works all become 'classic'. That's right, just as Mick said 'hope my works will be classic' ...

Mick Head is spending time with my music life.
It is exactly 'All-Time'...
even now and forever, always ..
I have no day when I do not remember Mick.
"(There's Always) Mick is On My Mind" .. x

I am able to meet lots of friends thanks to Mick Head.
Almost my encounter with Facebook friends is thanks to Mick.
I always appreciate him.
And I am thankful to my wonderful friends.

I will go to London on 5th May with my GF 'rie" to meet our newest Mick..."Islington Excursion"..
It is a real honor and pleasure that I was drawn on the brilliant poster of that gig Illustratoration by Brian McHenry.

Michael Head is part of my life.

I originally meant to mention 'Pacific Street'...
But the result was 'About my love for Mick Head'.. haha..
"Thank You"
hiro as Mick "Crazier" with Big Love from Tokyo..x

"(Don't Let Your Love) Start A War" / The Pale Fountains

"... From Across The Kitchen Table" (album) / The Pale Fountains

"Longshot For Your Love" / The Pale Fountains

ピンクフロイド THE DARK SIDE OF THE MOON EMI UK ハーベスト