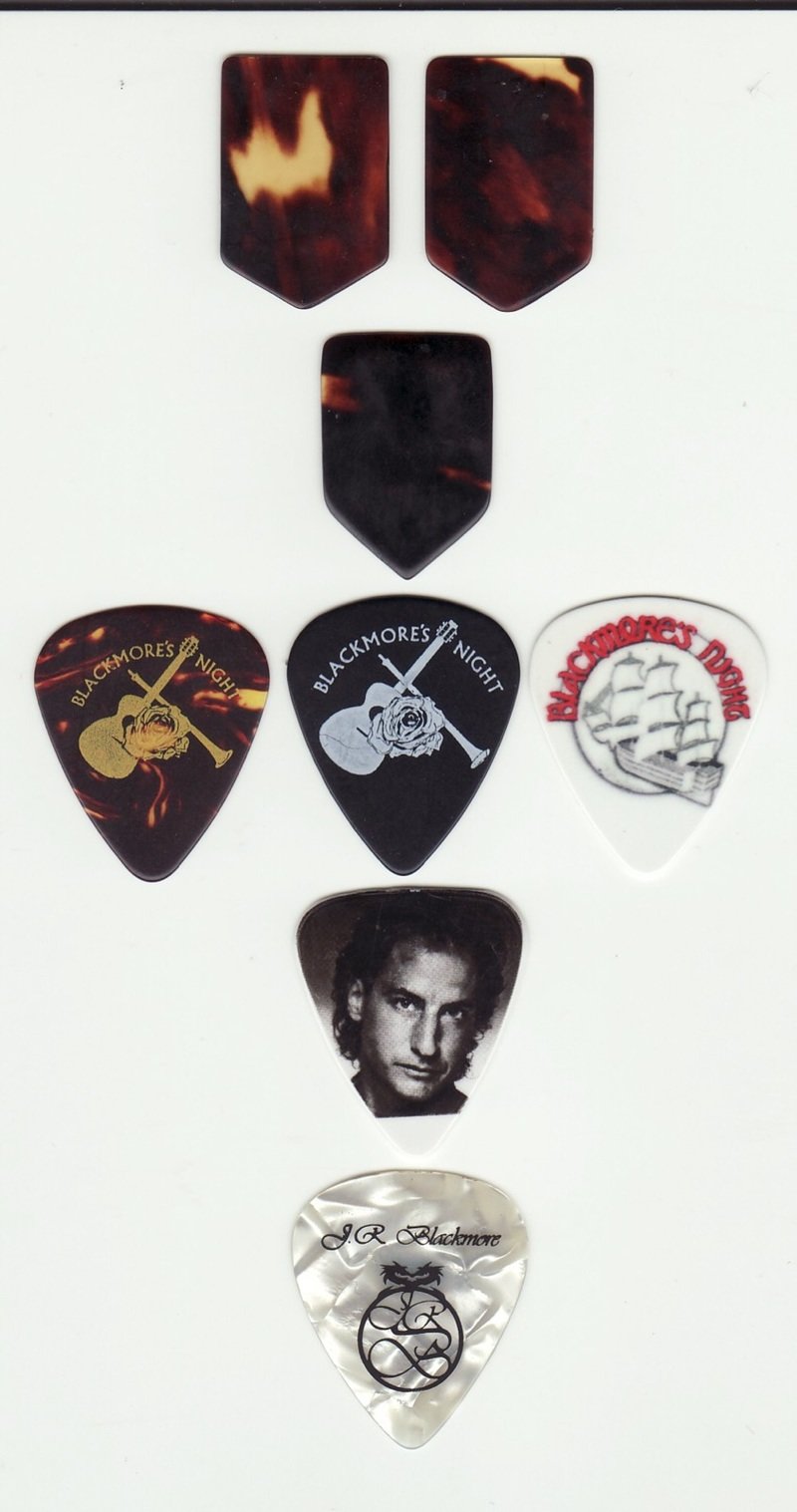 I got this particular Stage Used 1978 Pick (and the Pick Boy one as well) from a Professional Music Journalist who wrote for MANY magazines like Guitar Player, Guitar World, Rolling Stone, Playboy, Creem, Circus... and many more.
He interviewed with Blackmore before a show on the Long Live Rock 'N' Roll Tour in 1978 in Los Angels. According to the Journalist, At the very first time, of course, Blackmore was very rude to him. But by the end of the interview, Blackmore seemed a bit more friendly and gave him the pick from the top of his practice amp. The Journalist said that even the road crew seemed a bit afraid of Blackmore. Blackmore could be extremely rude and pissed off at anyone that interrupted his practicing. it sounds like the Blackmore we all know!
When the Journalist decided to part his collection, I was given many items from him except Jimi Hendrix Pick.

Ritchie Blackmore is notorious for re-using these same picks for many performances. He keeps about 10 picks in a small box.

As for the REAL Blackmore Pick, It's almost IMPOSSIBLE to get. The reason why Blackmore and his tech NEVER wants to hand the pick out to fans, or, NEVER used to flick picks to the audience is because the pick is made from GENUINE tort shell. Tort shell is outlaw by Washington Convention (CITES) and Blackmore and his tech SMUGGLED a sheet of tort shell into the US from South East Asia or sometimes from Japan. Then, His tech cut and polish the sheet of tort to make the Pick for Blackmore. - So that the edge of the pick sometimes rough. However, Blackmore recently is getting the genuine tort picks from Pick Boy. - Either way, He hates to give the pick and His techs were always told if they gave away a "real stage used pick" to a fan, then he would fire them by the man since Blackmore is VERY cautious man - for example, He ALWAYS stays on the lowest floor at the hotel when they are on tour, and take the nearest table to the exit door way when they went to a restaurant -, I mean Blackmore never get his hand dirty. (Actually, A guy who sold Genuine Tortshell Pick in the US was arrested by FBI.)

For those reasons, the tech gets many Homeplate shape Tort pick as a "Give Away Pick" from "Pick Boy” Japan to hand them out to the fans who try to obtain HIS Tort Pick.

2nd Row
- This particular Genuine Tort Shell Homeplate Pick is THE Pick Boy one from the tech as I told above. Slightly different shape from Real one. It's the same shape as the well known "Blackmore Model" Pick Boy picks. - No printing plain pick.

Into 2002, Blackmore and his tech finally made the standard shaped CUSTOM Picks by Fender and began to hand them out since SO MANY fans are trying to obtain the Picks and of course, the Tort Shell Picks are hard to get and illegal.
Since then, even Candise Night, says that Ritchie is NOT using the tort shell picks any more and is now using those Fender Picks. (However, We all know the TRUTH!! LOL)

Sir Robert of Normandy is also known as "Bob Nouveau" and is the member of "BLACKMORE'S RAINBOW 2016".

Bottom Row - J.R. (Jürgen Richard) Blackmore Pick from "Over The Rainbow"
- J.R. Blackmore is the Son of the Legend.