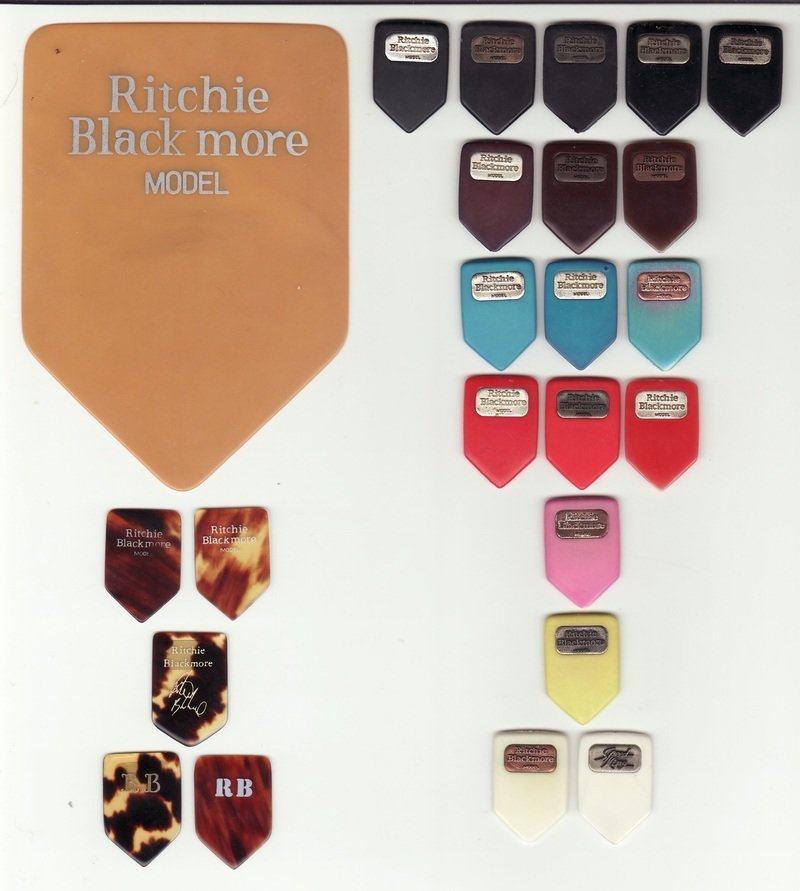 Sometime in the late '70's through 80's, the Pick Boy company made a decision to begin making picks in the familiar home plate shape in a material other than genuine tortoise. These color picks were made of hard nylon and had the curious attribute of having a small metal plate embedded in them near the top of the pick that was imprinted with "Ritchie Blackmore model" in the same font that was used on the printing that appears on older genuine tortoise picks that Pickboy also made in honor of the master guitarist. The plate is rectangular and is embedded in the pick to a depth that makes it seen from the front of the pick, but does not extend completely through to the backside. In most cases, the metal plate is in a silver or brushed nickel type finish, but can also be seen in a copper finish.

Pickboy probably produced a number of colors of the nylon pick as a tribute to Blackmore's band at the time which was Rainbow.

I have seen scans that could not be completely substantiated of Green, Purple and Orange versions.

3rd Row Middle
- A pick with a missing chain and ring by a small hole in the top right hand corner of the pick.

After the license with Blackmore has been expired, Pick Boy substituted those Nylon Picks for making "Speed King" Picks in 2 variations - one is "This Is My Fucking Pick" and the other is "Pick Boy Tokyo" on the back.

Bottom Row Right is one of the Speed King Pick.

Now that the nylon picks have been covered, it's time to move on to other Blackmore Model Picks made of Genuine Tortoise Shell below Giant Pick.

in the late 70s, Pick Boy company began making genuine tortoise picks to be sold to the general public.

Top Row 2 Picks are the First Ritchie Blackmore Model Picks.
- Slightly Different Thick - Most likely it because of the material.

3rd Row 2 Different "RB" Picks
- After the License with Blackmore has been expired, Pick Boy could not use the name so that the initial of his name was printed.