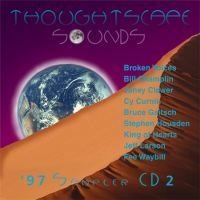 Various Artists / Bacharach... Applause "The Look Of Love"
Two Of A Kind - Music From The Original Motion Picture Soundtrack

Thoughtscape Sounds was surely one of the unforgettable independent labels that contributed to AOR / Westcoast music culture in late 1990’s. The label released the second sampler CD compiling songs from their releases, some tracks were picked up from their then-upcoming releases. In addition, the sampler featured unreleased materials only for this sampler CD; Bill Champlin's "Bad News" and “ We Don't Talk Anymore” performed by King of Hearts. Cy Curnin (The Fixx)’s solo album. “Mayfly” was planned to be released sometime in 1998 then by Thiughtscape Sounds, thus the title track “ Mayfly” and “Day To Day” were on the sampler but the release was shelved until 2005 when the album was finally to be public by Rainman Records, USA. “Coffee At Midnight” and “ This Morning in Amsterdam” by Jeff Larson were taken from his 1997 album “Beggars” (on It Stinks! Records, USA).