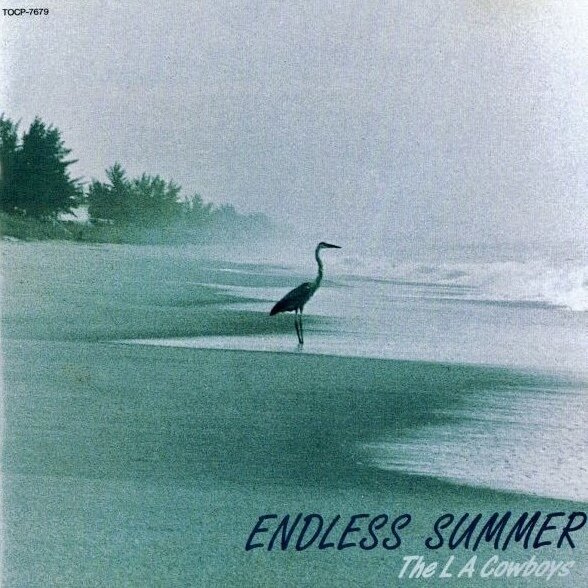 Endless Summer’ is one of the early 1990’s most under-rated Westcoast / AOR albums, despite its high quality. This is because this album was released only in Japan, with little promotion in 1993. The LA Cowboys are comprised of James Studer and Wayne Nelson. When Endless Summer was released, Japanese Westcoast / AOR fans did not pay much attention to the album because of misleading promotion by the label, which I would detail later. There were no music websites in those days, thus Westcoast / AOR music lovers in Europe or the United States had no way of knowing about this album. The album was already out of print by the time people started to talk about it. When it was reissued by AOR Heaven in 1998 in a limited 1000 copies, it did not take a long before the warehouse became empty. In the late 1980's. while Wayne Nelson kept busy with LRB, James Studer started to produce Mari Iijima, a young talented Japanese female singer/songwriter. They met while recording Mari’s album ‘Miss Lemon’ in 1988, and were married the following year. James co-produced Mari's next 8 albums, which featured first-call LA musicians including Joseph Williams, Jeff Porcaro, John Robinson, Michael Landau, Lenny Castro and LA Cowboy partner, Wayne Nelson. It was during this time that James and Wayne got a recording deal for their own project. Yes, this was “Endless Summer”. You might feel interesting that the album closes with a very beautiful ballad “Something In My Heart” featuring Joseph Williams as the lead singer. Also you should note that many great musicians were involved in this hidden gem; Michael Thompson, Buzzy Feiten, Tris Imboden, Mick Fleetwood, George Hawkins Jr. and many others. The album was misunderstood a bit that it was one of the Japanese pops covers by Westcoast musicians. 4 songs are Japanese pops cover, 4 original songs written by Studer with Nelson or other songwriters, track 8 was written and originally performed by Mari Iijima in 1990 which was produced by Studer, so it could be said to be another interpretation by the producer. The closing track “Something In My Heart” written by Michiru Ohsima, well-known Japanese female songwriter and originally performed by James Studer and The LA Cowboys, as the theme song of Japanese television 2 hour special drama; the life story of the female Japanese track and field athlete, the first Japanese women silver medalist of Olympic Games (1928 Amsterdam), aired on 22 November, 1992.
Just FYI, in case you might get the 2010 reissued one by AOR Heaven, Germany (AOR HEAVEN CLASSIX 004), you may be aware who wrote the liner notes... it was me....

To Be With You (Dance Version)