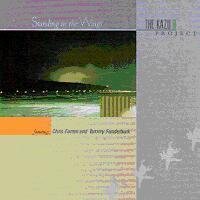 The Kazu Project / Standing In The Wings

After releaseing his first solo album "Time No Longer" in 1981, Kazu constantly made his own project albums featuring many session musicians in Los Angeles. In 1982 "The Direction West" featuring Carlos Rios and Bill Champlin, "Standing On The Outside" (1983) which was released here in Japan as the solo album of Robben Ford, "Is That The Way To Your Heart" featuring Greg Walker, Phillip Ingram and Norman Dozier in 1984 and this album "Standing In The Wings" featuring Chris Farren and Tommy Funderburk. This album is the best Kazu Matsui Project album for AOR lovers.
Fortunately we are able to get this album on CD after more than a decade from original release by Cool Sound Inc., Japan collaborated with Kazu Matsui on 10 October, 1998 ( COOL-014 / Kazu Records KAZUCD8505).

Move It To The Rhythm