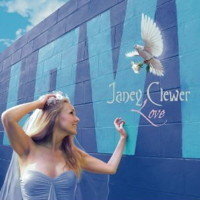 "Love" is Janey's special collection album gathering carefully selected collaboration tracks with your favourite vocalists and/or musicians, taken from her previous solo albums. "Falling In Love" (taken from 1st solo "Janey" ) and "Forever Valentine" (from 3rd solo "When Stars Collide" are with Bill Champlin, "Two Shooting Stars" (from "Janey") with Mac Jordan, "Can't Let You Go With My Heart" (from "Janey") with Richard Marx… "Call Me Romantic", the title track of her 2nd solo is one of my timeless favourite tune featuring Jay Graydon's best solo guitar of mid 90's. Peter Cetera supports Janey on "God's Perfect Plan" and then "Only Time Will Tell" duet with Eric Carmen would follow, taken from the same album. "Exposed" and "Lovers Are Never Lost" are picked up from 2005 album "Perfume".

You must appreciate 4 brand new songs, including a special bonus track, “If Only For Tonight” (duet with Joey Chemay), which is a benefit song for the children of Japan suffered from 2011 Mega-quake and Tsunami. The title track, “Love”, is one of the best ballads of the decade featuring all-star cast of singers including Peter Cetera, Marc Jordan, Bill Champlin, Tamara Champlin, Jaimee Paul, Joe Chemay and Janey. "Impossible" (duet with Joshua Payne) might be another hidden gem for you. You must satisfy with "The Last Words You Said" is self-cover of another Janey's greatest composition co-written with RIchard Marx for Sarah Brightman's 1998 album "Eden".