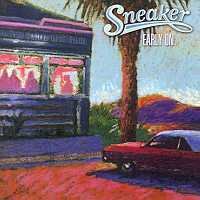 The Sneaker's early years rare materials including demos for their sensational debut album "Sneaker" and unreleased materials selected by Toshi Nakada, was released as the album “Early On”. Toshi Nakada selected 12 tunes out of 23 candidates including "More Than Just The Two O Us" alternative version featuring Mitch Crane on the lead vocal and a little bit classical instrumental piece. This collection album mainly includes early-years demos before releasing their 1s album as the title shows. And, it should be noted that the closing tune "Without Your Love" is the demo recorded in 1983 after the sudden bankrupt of the record company. You will find out how the Sneaker got a deal by listening to this album.
In addition to the above, I love the artwork of the album.

Love's A State Of Mind／Forgive The Girl